Twas the ride before Christmas

"Twas the ride before Christmas

When all through the streets,

Not a cyclist was racing, not even in cleats

Bike socks were hung by the chimney with care,

In the hope that St Nicholas would soon be there

Easy Riders were wrapped up warm on their bikes,

While visions of sausage rolls scored many ‘likes’

With Tim as ride leader, and I at the back,

Had settled our legs for a long winter’s hack

When out on the road there rose such a chatter,

I sprang from the rear to see what was the matter

Off I then pedalled, away to the front,

Pushed past the boys and looked as I’m wont

At the sun on the wet of the freshly-rained road

Gave dazzling lustre to objects below

When, to my wondering eyes should appear

But a pedal powered sleigh and eight riders held dear

An ‘Australian’ sleigh driver, so lively and quick

I knew in a moment, it must be ‘Our Mick’

More rapid than Quantas, his riders they came,

And he whistled and shouted and called them by name

On Tim! On Paul! On Cathy and Aidan!

To the top of the hill, make sure you don’t fall

(With apologies to “The night before Christmas!)

As it was a mild day just before Christmas, plenty of Easy Riders turned up for a bike ride. We were split into three groups, with the shorter group heading to Felsted, and two other groups heading out to Dunmow.

Tim led our group out along Clare Road, right along George Road then along the back of the health centre, to Panfield Lane. I think this is a good way out of the town. We went through Jaspers Green, Shalford Green, and past Andrewsfield. Paul was telling me how, in wartime, his father was evacuated from Bethnal Green to Braintree, and had very fond memories of Christmas celebrations run by the American airmen. All the local kids would ride their bikes to the airbase Christmas party, knowing they would have the benefit of lots of candy, party games and a celebration meal. Then after the meal, the airmen would have troop transports ready, so the kids could throw their bikes in the back, and each vehicle would take all the kids home to a particular village. These were obviously fond memories for Paul’s Dad.

When we got to Stebbing, Ann and Julie turned off to head to Felsted to meet the shortest group. As tail rider, I thought everyone was riding well, and I’d not even noticed Julie was finding it hard going. Tim had ridden alongside, identifying that her saddle was a bit low which was making keeping up difficult. Health & Safety tip for the day is to fine-tune your saddle height, to maximise the propulsion you get on the pedals. Tim suggested that if you don’t seem to get much propulsion, then slowly increase the height of your saddle – by only half a centimetre at time - until you get better propulsion. It’s something to do with which part of your leg muscles you use. It might be a good idea to get one of our more mechanically-minded men to assist with correct saddle height if you’re unsure. This is worth doing, as small alterations to your bike make a big difference to the pleasure that cycling can be. I was glad that Julie and Ann had given it a try with our group, but very much understand that when I’ve been chasing to keep up at the back, I’ve found it demoralising.

We turned left at Bran End and followed the B1057 into Dunmow. Refreshed by a tea stop, Tim led us on an alternative route home. The planned route used the Flitch Way, which has had a lot of renovations over the last year. However, we all remembered the glutinous mud on that section (and Jim had just cleaned my bike!) so a unanimous vote took us on a detour along the A130 through Barnston, then a left turn onto a side road that brought us out at Onslow Green. About another 100m on the A130 then another left turn to North End and Felsted. 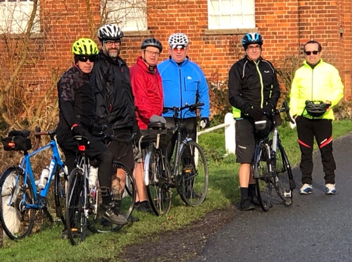 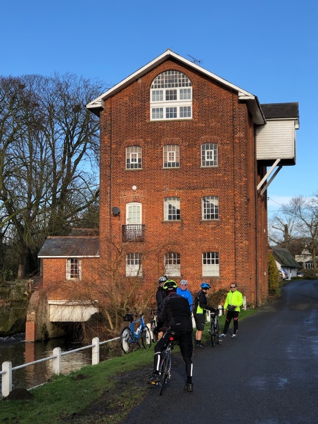 Then it was a familiar ride through Bannister Green and Bartholomew Green to Rayne. We split here, with me on my touring bike taking the Flitch Way, and those on road bikes taking Rayne Road back home.