A week or so ago, I had a bike ride to deliver scrubs fabric to a friend who lives in Newport. Lockdown was making her feel redundant, so she had thrown herself into making scrubs for Addenbrooks. She had run out of fabric, so I dug out a lot of my Mum’s old sheets and duvet covers, and I’ve now pedalled twice to Newport (with cake). This makes me feel I am doing something useful as the Braintree fabric/cake delivery service!

I started by riding along the Flitch Way, coming off at the station, and going past Restaurant 47 on Rayne high street. Apparently it used to be the Cock pub. I rode around the back of Stebbing. Stebbing still has major roadworks where they are sorting out the culvert at the south-east end of the main street, and I have learned the hard way not to take the byway (Clay Lane) on the north-east side of the village – it’s as flat as a newly ploughed field!  I rode past Tollesbury’s Farm and came into Lindsell from the north east side. I liked the logo for the cricket club, which was established in 1905. I can’t find out what the 3 trees are meant to indicate, or even which trees they are meant to be, but historically it is an area that has always been bounded by hedges.

Then I pedalled on to cross the B182 and stopped to drink in Duton Hill. The Three Horseshoes has the side building decorated with enamel signs. This is a real ale pub - standard ale Mighty Oak Maldon Gold, plus two other casks that change.

From Duton Hill, I turned left onto a lovely tiny lane that runs flat along the River Chelmer, before I turned right to climb the hill to Tilty. In 1153 a Maurice FitzGeoffrey founded Tilty Abbey. The Abbey was dedicated on St Maurice’s feast day, 22 September. St Maurice was the Roman leader of the Theban legion, thus becoming the patron saint of soldiers, swordsmiths, armies and infantrymen, as well as weavers and dyers, and finally unmarried merchants in Estonia and Latvia. Quite a busy patron!

From Tilty it is another pretty ride through Broxted to Henham. I think Henham is such a beautiful village, but I would not want to live there as it is so close to the flight path northeast of Stansted. There must be constant flights coming in to land, although I wonder whether Broxted is more affected. The Henham village sign outside the school, has a dragon on it. It appears the dragon was first sighted in 1668 as part of a hoax started by William Winstanley, a local worthy, successful and talented, but with a keen sense of humour. He and his nephew created a hollow 9’ wood and canvas, one-man-power ‘ flying serpent’. It made fleeting appearances in and around Birch Wood, Henham, causing great excitement and mystification in the neighbourhood.

Then I rode past The Cock pub, and stopped for a drink under a tree where there was a bench.

Following this was an easy downhill freewheel before turning right to head due north. That day there was not much wind, but what there was, came from the west and was hot, so I was starting to flag now. I went under the railway lines. It must be notoriously narrow, because all the cars traversed this area VERY slowly and hooted clearly before proceeding with caution.  Mick enquired whether the pothole under the bridge had been fixed – it had not. You can just see it in the shadow.

I am not sure why the Lea Valley Cycling Club has a pavilion here, just past the bridge under the railway, between Ugley and Henham. Lea Valley Cycling Club runs out of Walthamstow, and was created in 1969 from an amalgamation of Crescent CC (1903), Comet CC (1904) and University CC (1890). However the building next door is another pavilion type structure with a cyclist weathervane on it, and the building the other side, is called The Shaftesbury. The Shaftesbury CC was created in 1888, runs out of Mountnessing and their website refers to this building as their Club Bungalow, and is available for overnight stays for members and friends. As these 3 buildings are all on a narrow strip of land backing onto the railway, I wonder whether there was some affiliation between railway authorities and cycle clubs to offer land at low prices for social enterprises? 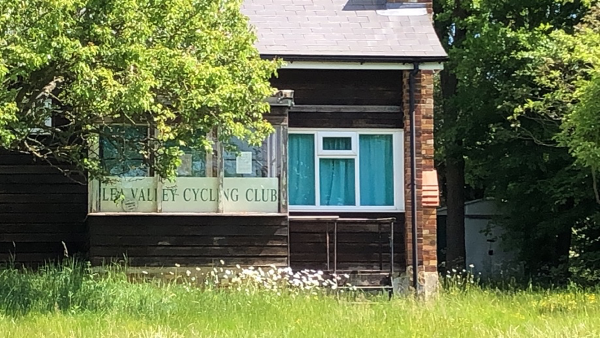 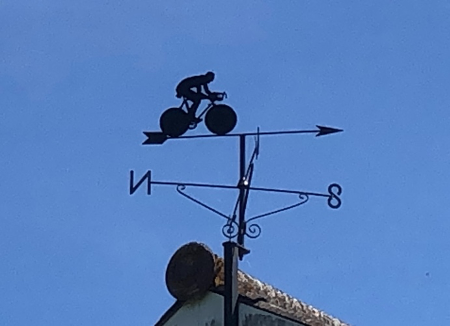 From here, it is a very quiet ride, running parallel, but at a lower level, to the M11, until the road reaches the B1383. I dislike this B road, because it is a fast road until it reaches Newport. I delivered my fabric and cake to my friend, and had an extended chat, my sandwich, and a drink. I planned to get another sandwich on the high street at Dorringtons, their local, excellent baker. However, they had a sign outside, stating ‘cards only’, so they were not handling cash. And I only had cash! Key learning point for future rides! Don’t bank on buying refreshments with cash. This is a nuisance, as I’m quite happy to carry cash - but not so keen to carry a card. But I’ll have to get on with it, and move with the times!

Not having enough calories to refuel properly, I put my head down and pushed for home as quickly as I could. I had planned a slight longer route, but plans can (and do) change. Back through Henham, turning left at the War Memorial.

Past the War Memorial at Great Easton (I hoped for ice cream here, but the village hall had just had a delivery of bread for the villagers, not a shop!)

Through Lindsell, past Tollesbury Farm and down the track to the corner of Andrewsfield airstrip.

I saw a beekeeper at a copse and stopped for a chat. We discussed what the bees were working and what gardeners could grow to encourage them. The beekeeper said honey would always pick up the flavours of the pollen and nectar source, which often was a good thing … but not always! He mentioned lavender and acacia as good flavour sources, but added that one year, the neighbouring farmer had grown several fields of onions. When the beekeeper came to harvest the honey from a dozen hives, he discovered nearly all of it had a pronounced smell of onion! So, what was he to do with about a hundred pounds of onion flavoured honey? He smiled and said he sold it to one customer – his local Chinese restaurant. The beekeeper said he was quite glad that the farmer grew a different crop the following year!

Once I had caught my breath, I rode along the road at the north side of Andrewsfield to Great Saling, then Rayne and home along the Flitch Way.

49 miles.  Absolutely spent. My longest ride for many years.